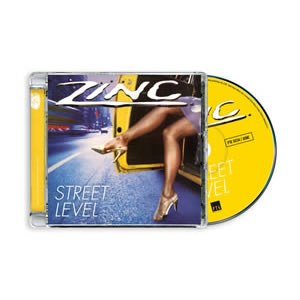 During the summer of 1982 French producer Jacques Fred Petrus and his Italian companion Mauro Malavasi released a string of hot R&B albums by Change, Ritchie Family, High Fashion, B.B.&Q. Band and Zinc. Zinc’s Street Level was the final record to leave the Little Macho Music factory that year and would be the last to be entirely produced in New York City.

Zinc wasn’t a real group but just the façade of yet another tasty studio creation fabricated by Jacques Fred Petrus & Mauro Malavasi. The studio group was composed of American and Italian session musicians led by the inevitable Malavasi. The production and arranging abilities of Mauro Malavasi and the great musicianship of key member Davide Romani once again shine through on this record. Lead singer Gordon Grody fronted Zinc. He was a white session singer and this again showed the deviant character of the project. Grody is a renown backing vocalist who has recorded with many Soul and Rock artists like Debbie Harry, George Benson, David Bowie, Steely Dan, Patti Austin, Luther Vandross and Talking Heads. He also provided vocals for the J.F. Petrus projects Macho and Silence.

Street Level was dropped in September 1982 by Jive Records, a label known for its alternative releases. Zinc was Urban R&B with touches of Pop, kept fairly basic, without too many frills. The emphasis was on the vocals and the perculating beat that made you want to bounce to the dancefloor. Though there were over 20 musicians and vocalists involved -including Fonzi Thornton and Bobby Douglas-, the spare arrangements gave everybody space. Highlights on the album are the inspired Kashif song and single “Street Level”, the chilly “Punkulation” and the Chic-influenced “This Is Where The Love Is”. Other fine selections include the naughty uptempo “I’ll Never Stop”, the energetic “I’ll Take My Chances” -flavoured with licks of rock guitar and polyrhythmic percussion-, and “Amazon” with its intriguing instrumental airs and chants.

Despite the suitable Jive label and a lineup of top musicians delivering a very well realized product, the Zinc undertaking was not a commercial peak and proved that the target market didn’t bite. Background singer Bobby Douglas formulated it like this: “Zinc was so ahead of its time that I knew it wasn’t going to be well received, because it was so much better than the shlock that was playing on the radio at the time.”

In 1983 the single “I’m Livin’ A Life Of Love” was released on Jive Records but no album followed. Contractual stipulations had forced Little Macho Music to publish a leftover for Jive. The song was composed by Malavasi and borrowed the arrangement of “Searching” by group Change. In 1984 Jacques Fred Petrus embraced Italo-Dance music and recycled the name Zinc for the Little Macho Music project Zinc feat. Sherwin, which resulted in the singles “State Of The Nation” and “Hollywood City”.