Back to Artist AlbumsTom Browne 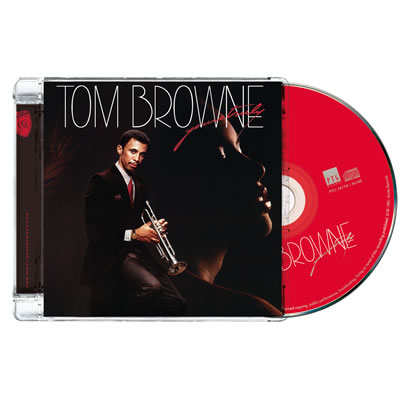 Back to Artist AlbumsTom Browne

Browne originally was piano player who had already piano lessons at the age of 11. But inspired by his collection of jazz records he later changed to trumpet. His first gig was in the Queens’ club, The Village Door and in 1975, he landed his first professional gig with Weldon Irvine. From here he played with Sonny Fortune and Lonnie Smith and was later introduced to Dave Grusin and Larry Rosen at GRP Records via Earl Klugh. Grusin and Rosen signed him to GRP Records and Browne broke onto the music scene in 1979 with an instrumental jazz fusion album titled Browne Sugar.

His first real breakthrough came in 1980 with the release of the self-penned “Funkin’ For Jamaica (N.Y.)”, taken from his second album “Love Approach”. The single hit number one on Billboard’s R&B chart for four weeks, and was also a big hit in Europe. It featured the lead vocals of Tonni Smith.

Continuing his association with the record producers Grusin and Rosen, his next album was “Yours Truly” (1981). The album included the songs “Fungi Mama” and “Bye Gones”. After signing directly with Arista, the album “Magic”, was released in 1981. Magic yielded the song “Thighs High (Grip Your Hips And Move)” , which peaked at #4 on the R&B charts in USA. Later, he progressed into an electro style of jazz with “Rockin’ Radio” from a 1983 album of the same name.(which also included a final GRP production “Brighter Tomorrow”). In 1984 he recorded a final Arista album “Tommy Gun”, which featured Siedah Garrett singing lead vocals and was produced by Maurice Starr. Also in 1984 he had a collaboration with “Fuse One” and he recorded their “Ice album.”

He also recorded with Roy Ayers on “Goree Island”, taken from his “In The Dark” album. Browne moved to Malaco Records and performed a large amount of session work. In 2000, Browne re-recorded “Funkin’ For Jamaica (N.Y.)” on Jazz FM’s 101 Eastbound compilation album, alongside with fellow jazz artist, Bob Baldwin. The track re-utilised the vocal skills of Tonni Smith (featured on the original).