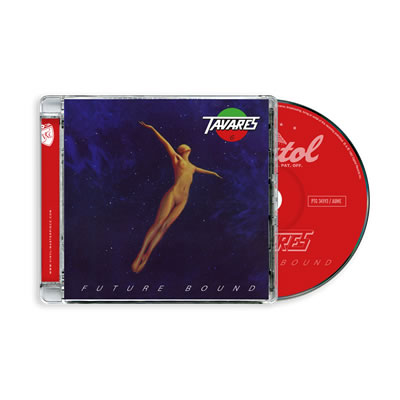 Released in 1978, Future Bound was the third album that Freddie Perren produced for Tavares and was the group’s sixth album overall. Once again, Perren sees to it that Tavares provides a healthy blend of up-tempo dance numbers and romantic soul ballads like “Feel So Good” and “All I See Is You”, Northern soul ballads that would have fit right in on a Stylistics, Delfonics, or Moments album. But those who savored “Heaven Must Be Missing an Angel” shouldn’t have a problem getting into exuberant disco-soul items like “Slow Train to Paradise,” “The Ghost of Love,” and Tavares’ hit version of the Bee Gees’ “More Than a Woman” which was available on the Saturday Night Fever soundtrack several months before Future Bound came out.

The group was asked to participate in the soundtrack to Saturday Night Fever, a movie about the Brooklyn disco/dance scene starring John Travolta. The score was being composed and supervised by The Bee Gees. When it was released in 1978, the movie was a huge success with Travolta winning an Oscar for Best Actor, but the soundtrack took on a life of its own! In its initial run, the double album sold eight million copies and has since been certified by the RIAA as fifteen times Platinum. Tavares and Freddi Perren were honored with Grammy Awards when the soundtrack won the 1978 Album of the Year award. Other hit singles on the album were The Ghost of love, Timber and Slow Train To Paradise. The album itself reached nearly the Top 100 album charts.