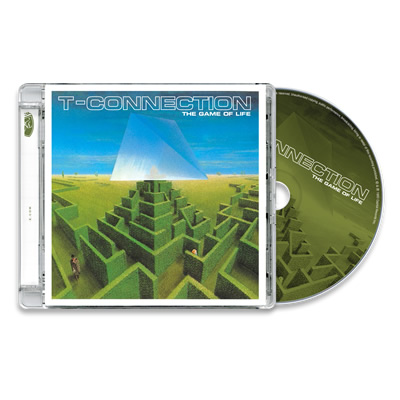 This time our re-issue roster brings us T-Connection, a bit forgotten but still highly in demand disco/funk band of the 70’s and 80’s. The group came from Nassau, the Bahamas, who scored a couple of hits on the Billboard Hot 100 between 1977 and 1979.

It was one of those groups that blurred the line between funk and disco, because they had 5 top ten hits on the US Hot Dance Charts. T-Connection was led by keyboardist Theophilus “T” Coakley. Other members were Kirkwood Coakley (bass, drums), David Mackey (guitars), Anthony Flowers (drums, percussion), Berkley Van Byrd (drums and background vocals) and Monty Brown (guitars and background vocals).

Shortly after the group’s 1975 inception, they decided to relocate to Miami, Florida and ended up signing with Dash, an offshoot of Miami’s T.K. Disco. The group’s affiliation with that label spawned four albums released between 1977 – 1979: “Do What You Wanna Do,” released in 1977, would become the most popular highlight of their career, reaching number one on Billboard’s Disco Singles chart and also registering at number 15 on the R&B chart. Once their time with T.K. was up, they signed with Capitol and headed north to New York. Four more albums steeped in synthesized funk followed for the group until they opted to stop.

Later this year PTG Records will re-issue more of this Bahamian disco/funk band.