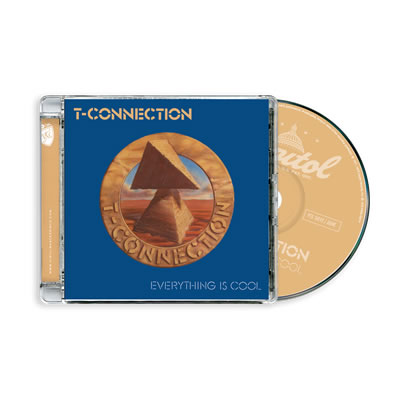 Bahamian vocalist, guitarist, and keyboardist T-Coakley formed T-Connection in the ’70s. His brother Kirkwood Coakley joined him on bass and drums, with drummer/percussionist Anthony Flowers and guitarist David Mackey as the other members. They quickly became enormously popular in the Bahamas and Caribbean before moving to Miami and signing with TK. The irresistible disco beat was at the height of its popularity in the ’70s and early ’80s and their single “Do What You Wanna Do” was a disco anthem, and one of the first 12-inch singles issued domestically.

“Do What You Wanna Do” was number one on Billboard’s disco chart for several weeks and was nominated for a grammy in 1977 but lost out to Thelma Houston’s “Don’t Leave Me This Way. The band attained its greatest measure of success during the late 70’s while signed to TK Records. ‘TK’ was the label responsible for the Miami sound at that time with the likes of K.C and The Sunshine Band, Bobby Caldwell and many others.

They recorded for TK until 1980, then signed with Capitol. They released four more albums with Capitol from 1980 to 1984, but were unable to regain their earlier momentum, although they remained popular with international dance audiences.

The Album “Everything Is Cool” contains an interesting blend of music that incorporates certain elements of Earth Wind and Fire’s style along a unique blend of rock and island music from the Bahamas, namely goombay and junkanoo music.

But with the release of “Everything is Cool” on Capitol Records the band’s transition from disco to R&B became more and more clear. The album was their most successful one from that period and it reached to position 15 on the Billboard R&B Charts.

Other T-Connection albums also available on PTG Records are “The Game of life” and “Take it to the limit”.