Back to Artist AlbumsSuperior Movement

Superior Movement – Key To Your Heart 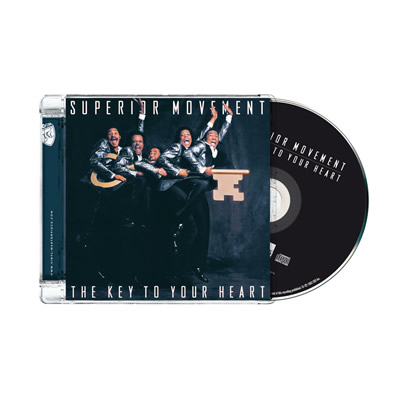 Back to Artist AlbumsSuperior Movement

Superior Movement – Key To Your Heart

Superior Movement – Key to your heart

Calvin Ford, Stanley Ratliff, David Williams, Billy Avery and Tyrone Powell were born and raised in Chicago’s Westside. In the 70’s they started performing under the name Fourth Movement which they in 1981 changed to Superior Movement.

They were discovered by C.I.M. (Chycago International Music) who signed the group in 1981 and recorded their first single “For You” which reached a modest position (77) in the Billboard R&B charts. Early 1982 their debut album “The Key To Your Heart” was released and this contains the classic R & B hit “Wide Shot” (Billboard R&B #47). This still very much in demand soul album contains eight soulgems of which “Be My Cinderella” still is a very popular track in the international soulscene.

The production en arrangements are from the hand of Donald Burnside, Glenn White and Tom Tom 84. The excellent horn section is from Earth Wind & Fire’s Phenix Horns.

Superior Movement was for a period of more than 17 years a very popular band and performed all over U.S.A. Finally the group went under in the mid nineties and by lack of success they started using drugs, were arrested and sent to jail. Luckily after a couple of years they were rehabilitated by the governor of Illinois and were released again. After his release, Superior Movement singer, Stanley Ratliff wrote a book about his experiences with the band under the title ‘A Dream, A Goal, Never a Reality’.

Their album ‘The Key To Your Heart’ is already for many years a collector’s item for soulfans all over the world. Now after 28 years of its first release PTG Records has this very much underrated album brought back on the market on CD. A real must have for every soulfan!