Back to Artist AlbumsSteven and Sterling

Steven and Sterling – One Magic Night 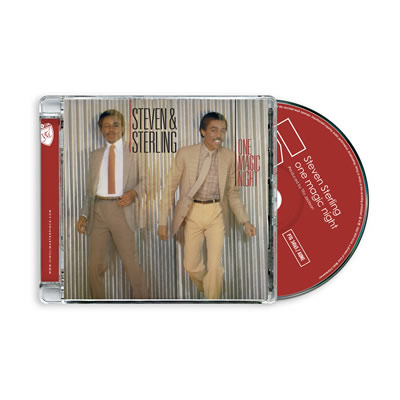 Back to Artist AlbumsSteven and Sterling

Steven and Sterling – One Magic Night

Tito Jackson wrote and co-wrote most of the songs and was also responsible for the production of their successful debut album titled One Magic Night released in 1982. A number of very successful musicians participated in the recordings like Michael McKinney, one of the bass players of Michael Jackson, Kevin“Kipper”Jones songwriter of Vanessa Williams and member of the venerable R&B/funk outfit Tease.

As backing vocalists participated Tito and Jermaine Jackson as well as Cheryl Lynn (from the hit record Got to be real) and Jim Gilstrap. RCA/Victor released three singles from their album: “I’m in love with you”, “Who is Jody” and their most successful single to date “Can be with you tonight”.

Unfortunately after their debut album we did not hear anymore from this talented duo. However the album is since long on the wantlist of many 80’s soul and funk fans so a good opportunity for PTG Records to re-issue this highly in demand album on CD .