Back to Compilation CD'sSolar The Ultimate 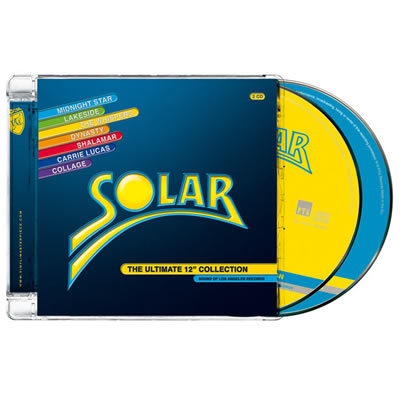 Back to Compilation CD'sSolar The Ultimate

S.O.L.A.R. Records (acronym for Sounds of Los Angeles Records) was an American record label founded in 1977 by Dick Griffey, which quickly became one of the most important disco, R&B, and dance music imprints of the late 1970s and 1980s.

Shalamar would become the fledgling label’s centerpiece. Shalamar were, in fact, the label’s best selling and most influential act; scoring nearly 20 hit singles and classics such as: “Right in the Socket”, “There It Is”, “Second Time Around”, “Make That Move”, “A Night to Remember” and “Dead Giveaway”.

The “SOLAR sound” was a collective effort, with artists working on each other’s sessions and artists encouraged to be creative. Sylvers was the producer behind the trademark SOLAR sound: funky, progressive dance music infused with soul and disco.

This unique 2-CD compilation brings you the ultimate 12 inch collection of the label SOLAR. All the SOLAR artists are included with their best 12 inch recordings!