View cart “Steven and Sterling – One Magic Night” has been added to your cart.
Back to Artist AlbumsSelection 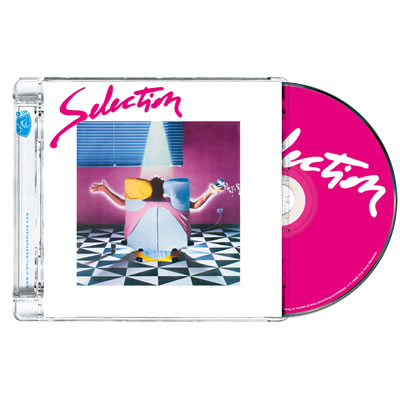 Selection – Selection
In the late seventies Italian producer Mauro Malavasi set the standard for high quality Italian produced soul-funk-disco music with bands like Change, BB&Q Band, High Fashion, Macho, Peter Jacques Band and Zinc. Other Italian producers start to copy the success of the typical Italian funk sound of Mauro Malavasi and Jacques Fred Petrus. They could easily stand the test with US productions in that period. In the early eighties more than fifty Italian produced acts had worldwide successes in the soul, funk and disco area.

It was not until the summer of 1982 before their first and only album was released on the Full Time Records label. For the album recordings, producers Claudio and Franco Donato joined forces with writers/arrangers Roberto Negroni, Naylon and Van Patterson. And together with leadsinger Van Earl Patterson and backing singers Gail Berry, Orlando Johnson and Patty Johnson they recorded eleven tracks.

“I’m So Glad”, “Ride The Beam” and “Rebel On The Run” became favourites among the many soul-funk lovers all over the world and the album and the 12 inches became collector items over the years.

This re-issue on PTG Records is completely digital remastered from the orginal mastertapes. And finally is this piece of classic Italian funk available in it’s full glory…. including remixes/long versions of the single tracks. We are very glad to present you the 1982 album Selection on CD!