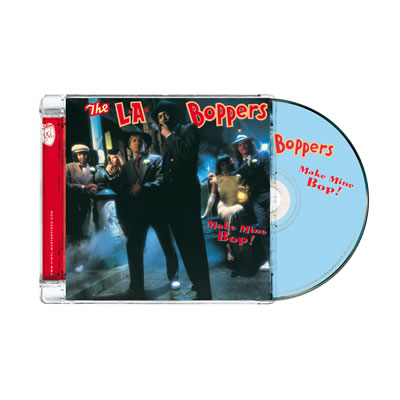 In the mid 70’s Augie Johnson formed the Boppers in Los Angeles, CA, to back his stylish, knickers-wearing group who had signed a deal with with Fantasy Records. The Boppers, consisting of Robert Griffin, Kenny Davis, Ed Riddick, Ed Luna, and Vance Tenort cut their own Fantasy album entitled The Boppers in 1978. The single releases were “Everybody Wants to be a Star” and “Something Missing” did unfortunately not hit the charts.

They switched to Mercury Records in 1980 and became the L. A. Boppers. The line-up also changed and now consisted of Tenort (lead), Gerry Davis, Riddick, Kenny Styles, Michael Stanton, Stan Martin, with Augie Johnson (on loan from Side Effect) also contributing to their sound. The L. A. Boppers (with input from Mikki Howard) dropped on Mercury in 1980; the first single “Is This the Beat (Bop-Doo-Wah)” made the R&B Top 30 and became their most popular single ever. Subsequent releases, the jazzy “Watching Life” and “Be-Bop Dancer,” failed to capture the same audience. A final Mercury album Bop Time (1981) featured an update of the Delfonic’s “La, La Means I Love You.”

Their final album on MCA Records titled “Make Mine Bop” was released in 1982 and featured the singles: “Where Do the Bops Go”/”Well Deserved Rest,” and “How Strong Love Can Be”/”Dog House.”. This album, now re-issued by PTG Records, is still highly in demand by soul/funk/jazz fans worldwide.