Back to Artist AlbumsJerry Knight 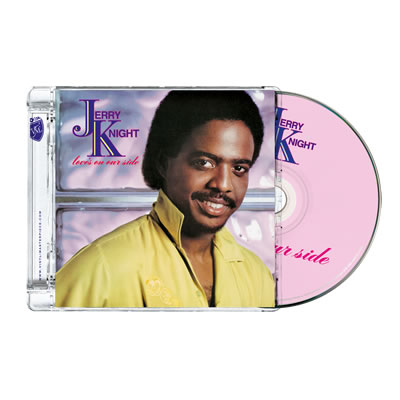 Back to Artist AlbumsJerry Knight

Jerry Knight started his career with Ray Parker Jr. and were the founding members of the group Raydio. They had a couple hits with “Jack and Jill” and “You can’t change that”. After a couple of years Jerry knight left the band to start his solo career.

Between 1980 and 1983 he made three albums for A&M and had a couple of top 20 single successes with “Overnight sensation”, “Perfect fit” and “Turn it out”. Due to lack of success Jerry Knight teamed up with Ollie Brown to start the duo Ollie and Jerry. Their debut single “There’s no stopping us” was featured in the movie “Breakin” and became a straight hit and reached the top 5 position in 1984. Although the time with Ollie was successful Jerry got more and more involved in songwriting and production work. He produced and wrote for The Whispers, Patrice Rushen, Debarge and the legendary UK singer Elkie Brooks.

When Jerry recorded in 1982 “Love’s on our side” he had abandoned the R&B/Pop style and his aim was to make a more radio friendly music. Leon Haywood produced four tracks on the album of which “She’s got to be a dancer” was the most successful single track. It reached to the number 71 position. The album contains a couple of very strong ballads “Brand new fool”, “Beautiful” and “Do you really mean it” (produced by Byron Clark and Jerry Knight). On some of the tracks we can hear James Ingram doing backing vocals and piano.

“Love’s on our side” has never been released on CD before and is digitally remastered.