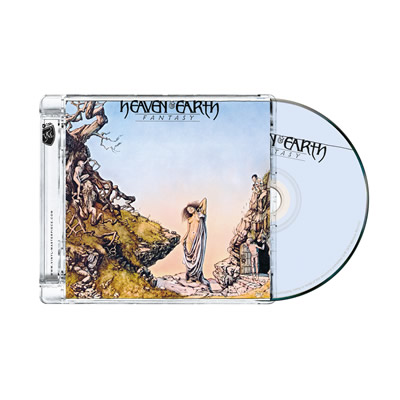 Back to Artist AlbumsHeaven & Earth

Heaven and Earth – Fantasy. In 1979 originally released on Mercury. A vocal quartet that originally went by the name the Soul Majestics, and consisted of brothers Dwight Dukes (falsetto/lead tenor) and James Dukes (bass), Keith Steward (tenor) and Michael Brown (baritone). Under the direction of producer Clarence Johnson, they recorded four albums as Heaven & Earth: one for General Entertainment Corporation (GEC), three for Mercury (Phonogram). Brown recorded on the first album and subsequently departed the group in 1978 and was replaced by Dean Williams. Williams recorded on the second album, and he too then departed, being replaced by Greg Rose.

The group could not manage to retain a compatible fourth member, whose vocal input was essential considering he was the baritone. In 1982, Dwight Dukes departed the group and formed the trio Cashmere with McKinley Horton and Daryl Burgee, recording on Philly World Records. Later that year Steward joined the group, and shortly thereafter Heaven & Earth disbanded.

Even though the Chicago-based quartet didn’t shake up the charts with their releases, their recordings were absolute top quality. In particular, the tracks written and produced by the songwriting/production team of Rodney G. Massey and Lawrence Hanks.

Fantasy was one of their most enduring records and the one that has the monster 2 part groover “I Feel A Groove Under My Feet”, which has a choppy club sound that feels a lot like the riff that was used in “Rapture”. Other cuts have more of a mellow group soul feel, and titles include “Let’s Get It Together”, “I’m In Love With Your Lady”, and “Whole Lot Of Love”. Recorded in Chicago, with arrangements by Floyd Morris. Heaven & Earth – Fantasy is a must for vintage R&B lovers.