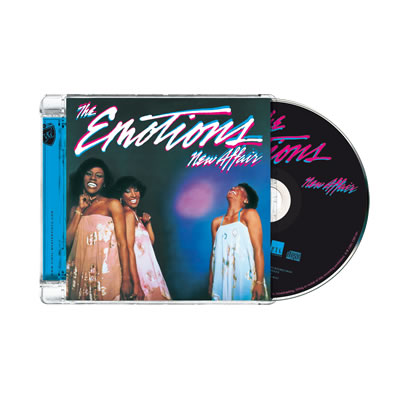 The Emotions – New Affair. The Career of the Emotions spread out from the seventees into the end of the ninetees They reached the highpoint of their career at the end of the seventees and during the eighties when they started working with Maurice White of Earth Wind & Fire. The albums Flowers and Rejoice brought them in the R & B charts but the single “Best of My Love,” was one of their greatest single cuts, with the Hutchinson sisters’ tight harmonies working perfectly with White’s joyous production. The follow-up single was equally strong. A beautiful ballad, “Don’t Ask My Neighbours,” took the group to the top of charts and became one of the most covered tunes of the next 20 years.

The Emotions scored again the following year with the single “Smile” and the hit album Sunbeam. Then in 1979 they topped the pop, soul and disco charts with “Boogie Wonderland,” an infectious dance duet with Earth Wind & Fire that became one of that year’s biggest hits. Their next album, Come Into My World, was solid but began the decline of the group’s sales (as well as mentor White’s midas touch). In the early eighties they released New Affair but it did not reach high in the charts. However the album is strong enough and highly in demand by disco funk fans to put it out on PTG Records again.

In the 80’s the group moved from Columbia to Red Label Records and then Motown, scoring modest hits with “You’re the One” and “Miss Your Love,” before briefly retiring. They regrouped in the early 90s to perform a music version of their careers entitled Bigger than Bubblegum and releasing a live album in 1997. They continue to perform at smaller venues around the world and at private parties