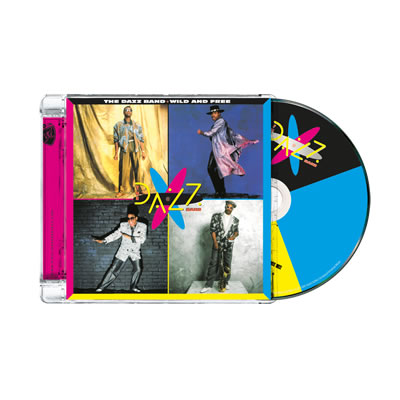 Dazz Band – Wild And Free. The Dazz Band was founded in the late seventies and was well into the eighties a very popular funk band. They soon came with Motown under contract and had a very successful period with many big hits. After five years with Motown their contract ended and they signed in 1985 a contract with the then highly popular label Geffen Records. For their new record label they recorded the album Wild and Free.

Their music was now changed into a much more house music style with electronics and solid dance beats. As singles were released the title song Wild and Free and L.O.V.E. MIA but they only reached modest positions charts. However the Dazz Band remained until deeply in the nineties a very popular band with a large audience. But unfortunately not all of their material was available on CD.

PTG Records therefore now re-issued this still very popular album on CD. As extras are on the album not less than four bonus tracks, an extended version of Wild and Free, a remix by Farley “Jackmaster” Funk of the track L.O.V.E. M.I.A. and the two never before released tracks on CD titled “Last Chance For Love” and “A Place In My Heart”.